We left Fiji, and headed over to Vanuatu. Mark and I did not want to go on another long passage, but agreed instantly when we found out there was a volcano. The volcano is called Mount Yasur. The passage was three days long, and some parts were bumpy.
﻿﻿﻿﻿﻿﻿
We got to a place called Aneityum. We stayed there for a while, got partially checked in, and then left for Port Resolution, which is on an island called Tanna.
﻿

We headed up the mountain to see the volcano. There were some cool dances, and the ground shook when the dancers jumped or stomped. Then we drove further up the mountain to Yasur itself. The mountain boomed when we were about to climb up, and a friend from Amelie IV, Meghan, got scared. I got scared too!
﻿


We climbed up the volcano, and saw some lava spurt out. I call it a belch. You can feel your ears pop when there are big explosions, and you can also feel the heat of the lava. Then, it got dark. The lava was a lot brighter in the night. It was really windy up on the volcano. I was being blown slightly towards the volcano. 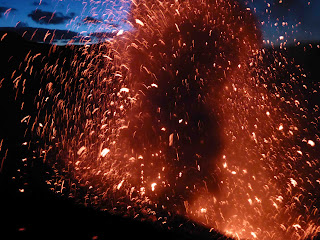 Near the end, we were heading back to the cars when another belch came up. We watched as a chunk of molten rock flew onto the observatory! Dad ran back up to get a look. He said it was about the size of the pickup truck's carrying bed that we were riding in.